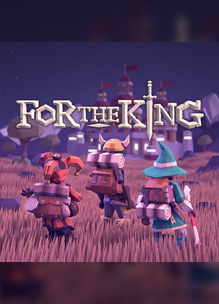 GOG.com announced on May 25th, 2021 that For The King would be removed from sale on the platform the following day, May 26th at 3pm UTC. As is usually the case, the notice confirmed that anyone who had purchased the game up to that point would be able to access it through their GOG library. As the only release from IronOak Games, For The King was potentially delisted as the studio no longer sought to support the title on GOG.

The King is dead, murdered by an unknown assailant. Now the once peaceful kingdom of Fahrul is in chaos.

With nowhere left to turn and stretched beyond her means, the queen has put out a desperate plea to the citizens of the land to rise up and help stem the tide of impending doom. Set off with your make-shift party, either single player or local, or online co-op. Choose to split your party up and cover more ground, or stick together for protection. A sound strategy can mean the difference between life and death.

For The King is a challenging blend of Strategy, JRPG Combat, and Roguelike elements. Each play through is made unique with procedural maps, quests, and events. Brave the relentless elements, fight the wicked creatures, sail the seas and delve into the dark underworld. None before you have returned from their journey. Will you be the one to put an end to the Chaos?

Fight and die as a party in fast paced and brutal turn-based combat using a unique slot system for attacks and special abilities. Find and gather herbs for your trusty pipe to heal your wounds and cure your maladies. Set up safe camps or brave the horrors that nightfall brings.

Just remember adventurer, you do this not for the riches or fame but for your village, for your realm, For The King!