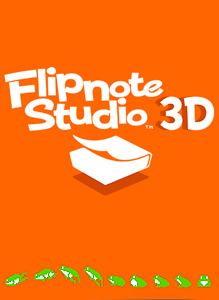 Flipnote Studio 3D was available for a limited time to North American, European and Australian users through Nintendo’s loyalty programs: Club Nintendo and its successor, My Nintendo. Existing Club Nintendo users in North America — and those who signed up for a My Nintendo account in early 2016 — were issued a download code for the application. The unofficial Facebook fan community posted a reminder on April 28th that the app would no longer be available after April 30th in North America, Europe, Australia, Mexico, and Brazil.

However, Flipnote Studio 3D returned to the My Nintendo rewards catalog in North America no later than November 20th, 2016. It has since returned in other territories as well while the Japanese version (known as Moving Notepad 3D) has remained free and available to download since release.

No reason was given for the removal and return of the app in Western territories but in the time that it was available users noted its lack of functionality compared to the Japanese version. Moving Notepad 3D is supported by 30-day paid passes with actions like viewing or posting animations, Favoriting a creator, or Liking an animation requiring the use of Star Coins; somewhat like a monetized version of the Miiverse. Sharing in the Western versions is limited to local wireless connections or saves to the SD card.

“Create your own unique 3D animations! Unleash your inner artist with Flipnote Studio 3D! Draw layered images to create single three-dimensional frames; string multiple frames together to create 3D animations! Use an array of touch screen drawing tools or the Nintendo 3DS Camera to make animations. You can add sound effects and background music, then export your flipnote as an AVI or animated GIF! Exchange your animations with friends using a local wireless connection.“

“This software is not available for sale. For a limited time, until April 30, 2016, My Nintendo members can receive a code to download this game.”
– Flipnote Studio 3D homepage (Early 2016)

“The Flipnote Studio™ 3D software is currently not available for purchase. However, it is offered as a reward through My Nintendo. For info on My Nintendo, click here: https://my.nintendo.com/.“
– Flipnote Studio 3D homepage (November 2016)