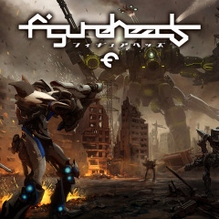 Square Enix announced on March 15th, 2018 that servers for Figureheads (フィギュアヘッズ) would be shut down on June 30th. Ahead of this, the game would be made unavailable to download on PC and PlayStation 4 on June 28th. PlayStation Lifestyle translated the official announcement which details the game’s difficulty in finding a wide enough player base to remain profitable:

“From the very beginning of the service, we performed expansions with an axis on a unique gameplay system that let players enjoy both shooting and strategy elements, and many people were able to play it.

We thought we could provide “an experience that could only be tasted with this game,” but on the other hand, more than half of the customers didn’t even finish a single match and ended up leaving the game due to reasons like “It’s difficult to control wingmen,” “The game rule is not simple,” and “The game speed is slow.”

This was an extremely fatal situation for a versus game, but it was also a title with a trait that led people who took a liking to it to continue playing in the long term. So while we tried to keep this title’s gameplay system as much as possible, we intended to add more people to enjoy the game, including those who want to play modes other than versus, by adding a new PvE mode which could also let them get used to the controls. Also, as we adjusted the game balance and speed bit by bit, we were able to release the PS4 version of Figureheads on March 9, 2017.

Through various improvements and measures, more new people had continued to play compared to before, but ultimately we were unable to improve the core issues and decided it would be difficult to continue this service in the long term.”

“A new robot action consisting of PvE mode in which players join forces and fight against foes, and PvP mode in which a team of five players competes “Figure Heads” will appear in the spring of 2017!

The player controls three robots to achieve victory. Of course, robots can be widely customized!  Set your favorite weapon, armor, and combat aid AI “Figure Heads” and set off for a world of online play!“