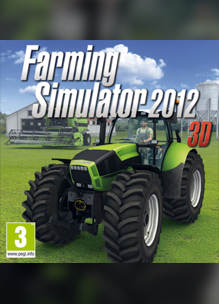 Farming Simulator 2012 3D has been delisted from the Nintendo 3DS in North America and Japan. At this time the date of delisting is uncertain but it may fall in line with other delisted titles in the series ranging between 2018 and 2019. Similar to other Farming Simulator titles, the delisting was presumably caused by the end of publishing arrangements with GIANTS Software, the creators and property holders of the Farming Simulator franchise.

The player begins their career as a virtual farmer by taking control of a small farm that is continually expanded in the game by the purchase of agricultural land and at the same time enhanced with newer equipment and larger machines. The career mode, with its integrated financial management section, will lead the player through a variety of agronomic problems.

In the vast, freely explorable world of Farming Simulator 2012 3D, you will find many agricultural areas surrounding the player’s farmyard, an integrated road network running through the countryside, as well as a small village. The dynamic day and night cycle not only helps the player in the optimal scheduling of tasks but also adds to the overall realism of the simulation.“