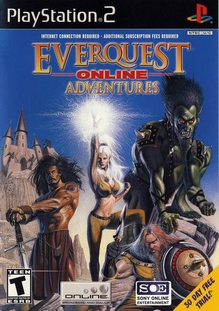 EverQuest Online Adventures and its expansion pack, Frontiers, were shut down on March 29th, 2012. The team announced the shutdown of this and several SOE titles one month earlier:

Since 2012 a community of fans has been working to reverse engineer the game and bring it to PC in the form of Project: Return Home. As of 2018 a functional test server was available to log into.

“EverQuest Online Adventures is an all-new massively multiplayer online roleplaying game for the Playstation®2 computer entertainment system. It features a huge, seamless 3D world. The game world is designed to support 5000 simultaneous players, and our network can support enough worlds to keep hundreds of thousands of players online. Players will team up with people from around the globe to fight monsters and explore dangerous and spectacular locales.

The goal of the game is to develop your character, complete quests and explore the world. You can do this by adventuring on your own or teaming up with other players. Characters can take up the cause of good or evil. Part of the fun is just hanging out with your friends and enjoying the view. We are building a living world for everyone to enjoy.“