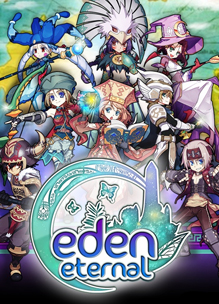 After 10 years in Eden Eternal full of peaks and valleys together, peace finally came, and we have reached the Eden Eternal. Today, with a heavy heart, we are sad to announce that Eden Eternal will officially cease all operations on April 29, 2021.

This decision was not an easy one to make. We concluded that the game could no longer sustain itself.  While we are discontinuing the game’s service, we will never forget the incredible journey we embarked on together. It is never easy to announce the shutdown of any game, knowing how much time and effort we have all put into making Eden Eternal enjoyable for many years.

Starting on February 24, 2021, we will close the registration of new accounts, including the disabling of cash purchases. Players whose accounts were created before the closure of registration and have already installed the game can still connect to the server and enjoy all game features until April 29, 2021. The following content will be available:

– 95% discount on all in-game items sold for AP in the In-game Store.
– Server Boosts for EXP, Loot Drop and Gold will be active.
– Weekly item giveaways.
– In-game events.

The story of this land survives in ancient legends, passed down through the generations. The saga begins long ago, when races from all corners of the world set sail toward the horizon, each searching for a brighter future. One by one, they arrived at the Central Continent, an untouched land. Living together in peaceful harmony, they worked side-by-side to construct their utopia. However, each race began forming its own ideas about what was most important for their collective future. Arguments turned to fights, then all-out war. Conflict replaced cooperation, and bloodshed ripped the new world apart.

Class Freedom
Eternal Guardians possess so much power, they’re never limited to just one class per character. Start as a Warrior or Magician, then freely swap between classes as you unlock them. Characters will discover a total of 16 playable classes, on their journey through the Central Continent, from the nimble Thief class to the mystical Shaman class!

Blades, Bows, and Blasts
The combat in Eden Eternal is fast and furious, with powerful attacks from fearsome beasts coming from every side. The game’s one-of-a-kind Break Point System is designed to keep even the longest battles interesting–target a boss’s weaknesses to do extra damage, then watch as it becomes visibly injured and its attacks falter.

Creatures Great and Small
The Central Continent is home to a wide variety of beastly creatures and offers a total of five playable races to choose from. Stalwart humans, agile Halfkins, clever Zumi, waggish Anura, and brawny Ursun give players a wide variety of customization options. With five character slots available, you can even have one of each!

No Place Like Home
Every MMO has guilds, but in Eden Eternal, guilds can build their own towns! Construct and upgrade various buildings, from warehouse storage buildings to player housing, as you help your guild create its own bustling neighborhood.