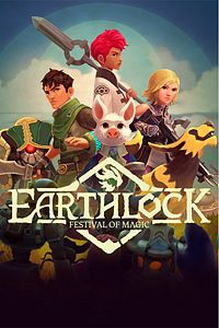 Earthlock: Festival of Magic was delisted on Steam on March 19th, 2018. It was presumably delisted on PlayStation 4 and Xbox One around the same time. The game had not been delisted on Nintendo Wii U until August of 2018 according to a tip from reader MacGruber. They inquired with the developer who said they removed it as they were no longer able to update the older version of game. However, Festival of Magic returned to sale on Wii U, possibly later in August but more likely at some point in the Fall of 2018.

After the initial release, Snowcastle Games took public criticism to heart, and rather than move ahead with a sequel they released an expanded version of the game, now simply titled Earthlock. They issued the following statement on Kickstarter and Steam on December 21st, 2017:

“…the changes are so big that there was no way we could keep it compatible with existing save games. In order to avoid problems where a patch would void all save games, we have set up a new game in the e-stores: Earthlock.

After we completed the PS4 version in January 2017 we began pre-production of Earthlock2. However, after a few weeks getting super excited about our next game, we realised that we were not comfortable leaving Earthlock: Festival of Magic behind as it was. A lot of the criticism we had gotten on the game by then were things we agreed with. For the initial launch we had to make quite a few cuts during the development and some of those cuts really hurt the story.

Long story short; We decided to make what we ended up internally calling shouldhavebeenedition. That way we could leave Earthlock 1 behind us with pride and begin work on Earthlock 2.”

On March 8th, 2018, the same day Earthlock was released, Snowcastle Games announced that the original “Festival of Magic” version would be removed from sale. Players who already owned the game would be issued free copies of the updated release except on the Wii U where they were unable to publish the follow-up. The updated version was ultimately released on the Nintendo Switch.

The original “Festival of Magic” version remains available on physical media for PlayStation 4 and Xbox One.

“Earthlock is an indie developed, adventure RPG inspired by the classic 3D RPGs of the late 90’s, with a fresh take on turn based combat and character progression. A tribute to true turn-based RPG fans, Earthlock: Festival of Magic will test even the most strategic of players.

Embark on a journey to save the beautiful world of Umbra, a harsh planet that stopped spinning thousands of cycles ago. What started as a mission to rescue Amon’s uncle from the clutches of an ancient cult, soon spirals into an adventure that was centuries in the making. You must bring together this group of unlikely heroes to stop the ruinous past from repeating itself.“