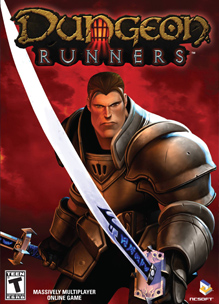 NCSOFT announced in September of 2008 that they would be refocusing their efforts on AAA development and “moving away from” lighter titles like Dungeon Runners. Although they didn’t confirm that the game would be shut down at that time, Producer & Lead Programmer Stephen Nichols made the announcement one year later on September 16th, 2009.

First, something nice! I’ve really enjoyed working on Dungeon Runners for the past three years. I’ve come to know many of you personally and have, without a doubt, had the best time in my nearly 20 year game development career working and playing with you guys! You are dedicated, passionate players that have really helped us to make Dungeon Runners what it is today. Awesome players for an awesome game! Kudos!

Now, it’s time for the bad news. Dungeon Runners just isn’t cutting the mustard. If she were a ship, she’d be taking on water. Yeah, she’s been taking on water for a long time now. Are my cryptic references too hard to decipher? The game just isn’t profitable. And, the first rule of business is to be profitable! Man, I must have missed that day in business school… but I digress.

We’ve been trying to figure out how to fix things for some time now. And, that’s where things get sticky. We’ve got some ideas that could work. But, they’re expensive to implement and pretty risky. Those two facts, coupled with the recent loss of some key developers, make achieving the success we seek pretty much out of the question.

As things stand now, we’re a three man team. Yeah, we lost two of our five man team recently. Not nearly enough manpower to get where we need to be. Rebuilding the team isn’t really an option for various reasons. So, where does that leave us? Can you guess? Yes, that’s right, we’re going to be shutting Dungeon Runners down at the end of 2009. New Year’s Eve to be exact.

Okay, now that the bad news is out of the way, let’s get some more good news to make the sandwich complete. NCsoft has worked with us on a plan to compensate Dungeon Runners players. I think we’ve come up with a nice package for all players with paid memberships as of today (9/16/2009). You’ll be getting a 30 day game time serial code and digital copies of City of Heroes Architect Edition and Guild Wars Prophecies. FREE games FTW! I know, it’s not Dungeon Runners… but it’s still frigging nice! Of course, any of you guys that need refunds for multiple-month membership purchases will be taken care of. And, as always, our helpful support staff will be available to help you with any issues you have.

Wait, there’s even more good news! While we may be going out, we’re going out in style, with a few changes to the game for the coming “End Time”. Mythic loot will drop much more frequently. We’re significantly reducing the cost of expensive King’s Coin vendors. We’re also quintupling the rate of XP gain to help you finish the game before year’s end! Finally, we’re adding a huge nuke to Townston that will blow up on New Year’s and take the game down with it. There’s more, but what fun is there in spilling all the beans? Oh, its gonna be a fun time till the end of the year! Loot finding, leveling madness. I may finally make it to level 100 myself now…

So, try not to be sad. It may be the end of Dungeon Runners, but it’s not the end of the world! I’ll still be working on the game until the very end. We can chat, reminisce and play DR until the lights go out.

See you in the game!

Shortly after the game was shut down, by January 3rd, 2010, the website and accompanying forums were also taken offline.

NCsoft® North America announced it has opened to the public its first free-to-download and play game, Dungeon Runners™, as the company continues to expand its online entertainment offerings. Dungeon Runners is an online, multiplayer role playing game in a fast-paced sword-and-shield setting where defeating monsters and evil enemies results in piles of loot and treasure.

Dungeon Runners, currently available strictly via free digital download, has a play-for-free tier where players can access large chunks of the game’s content, and a “membership level” for $4.99 per month where players are given, among other things, log-in queue priority and access to the most powerful items, weapons and armor. Membership status also includes bank storage for up to 220 loot items and the ability to stack potions in one slot to save room for even more loot.

In Dungeon Runners, there are a variety of character archetypes to choose from including fighter, mage and ranger in a classless RPG system where players are not locked into skills that are usually associated with their specific archetype.

Dungeon Runners focuses mainly on action and battles with limited death penalties and endless gold, weapons, armor and magic items available to claim after defeating hordes of monsters. The game also features a lighter side, with subtle and not-so-subtle humor sprinkled throughout the game including names of many items in the game. For example, one particularly dangerous sword is called “Shifty’s Crystal Sword of the Hypersonic Monkey” and a very helpful magic item called the “Pulsating Dragon Eye Amulet of the Thorny Donkey.”

Thanks to UnderSampled for submitting this game to the site