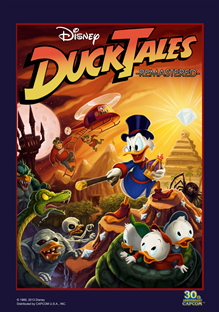 Capcom announced on March 3rd, 2020 across social media and the Capcom Unity blog, that DuckTales: Remastered had returned to sale:

“DuckTales: Remastered is back on digital storefronts! Join Scrooge McDuck on world-spanning adventures in this re-imagining of the 8-bit classic!”

No explanation was provided but given that DuckTales is a Disney IP, expired (and now renewed) licensing was most likely to blame. The original delisting details follow.

Capcom Unity’s Kellen announced in a blog post on August 6th, 2019 that DuckTales: Remastered would be delisted from all digital platforms just two days later on August 8th. According to SteamDB the game’s price was set to $0.00 on August 10th. The blog post read:

Heads up, everyone; DuckTales: Remastered is leaving digital storefronts in a duck-blur, and will no longer be available for purchase beginning August 8th, 2019. If you’ve already purchased it in the past or if you buy it before the dates and times below, you’ll still be able to access and play the game.

Pogo jump your way into Scrooge’s Money Bin while you can! DuckTales: Remastered is getting a farewell price drop for 75% off on most platforms before it gets removed for purchase.

The game will be digitally available on the following platforms until:

Disc-based versions of the game will install and play normally, and if you’ve already bought the game digitally, you’ll still be able to re-download it even after it’s removed, too. The times above are approximate, so please don’t wait until the last minute if you want to purchase the game digitally while it’s still available. So, get out there and solve a mystery, or re-write history!

Although not confirmed, the delisting was likely caused by expired licensing from Disney, almost exactly six years from the remaster’s original release. It is also possible that the game was delisted ahead of a new digital DuckTales effort from Disney, potentially based on the current animated series.

NOTE: Those seeking out a physical release of the game should note that there are two iterations: one with the game on a disc and another with only a download code that is likely unusable as of 2019. According to the packaging, all versions that included a Disney Collector’s pin only came with a download code for the game.

“DuckTales: Remastered is a hand-crafted, beautiful reimagining of one of the most cherished 8-bit titles of all time. Go back to one of the golden ages of gaming, but now refined with a level of detail that will please the most hardened devoted Disney or retro Capcom fan, alike.

Featuring hand-drawn animated sprites, authentic Disney character voices talent and richly painted level backgrounds from the classic cartoon TV series, Scrooge McDuck and family come to life like never before. The gameplay retains the authenticity of its 8-bit predecessor, simple and fun, with slight modifications to improve gameplay flow and design. Embark on an authentic DuckTales adventure, as Scrooge McDuck and his three nephews Huey, Dewey and Louie travel to exotic locations throughout the world in their quest to retrieve the five Legendary Treasures.“