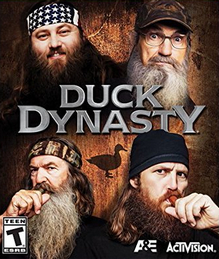 Duck Dynasty was delisted from Steam on November 13, 2017. It was likely delisted around this time on PlayStation and Xbox platforms: on Xbox 360 specifically it was last confirmed available on October 30th and removed from sale by November 9th, 2017. The game was almost certainly delisted due to expired licensing of the Duck Dynasty property from A&E and Duck Commander goods.

“Take on the role of Willie’s son John Luke as he learns how to become one of the Robertson Duckmen! Interact with Willie, Uncle Si, Jase and the rest of the family from the hit TV show. Go duck hunting, varmint shooting, off-roading and play office pranks in the Robertson’s hometown of West Monroe, LA. Will you learn the way of the beards?“

For a limited time only: Redeem the unlock code inside to play the Redneck Logic Uncle Si Quiz Game. Prove how well you know Si to win an in-game reward!

Thanks to @Gaggapudding for submitting this game to the site