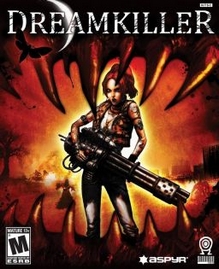 Dreamkiller was delisted from Steam on September 4th, 2014. The delisting was likely caused by a separation from publisher Aspyr Media. It could also have been caused by the closure of developer Mindware Studios, although their other titles remain available on Steam, published by THQ, as of this writing.

Dreamkiller is a fast paced, frenetic first-person shooter that takes place in the mysterious world of our dreams. The main character, a heroic psychologist named Alice Drake, has an extraordinary ability to enter the minds of her possessed patients and combat the nightmarish foes roaming the subconscious.

Utilizing a host of fantastic weapons and her own special abilities, Alice confronts our common demons only to realize an even deeper menace reigns within. The ultimate showdown becomes inevitable between that which would torment, and she who will protect, and only one force will prevail amidst a variety of dreamscapes as varied and bizarre as the human mind itself.