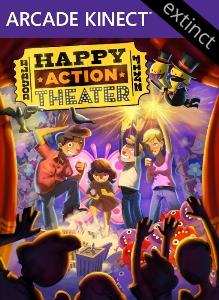 Double Fine Happy Action Theater was delisted on December 24th, 2012 after the release of Kinect Party on December 18th. Kinect Party contains the same 18 “channels” as DFHAT on top of 18 new ones and has been billed as a sequel but clearly serves as its replacement; Double Fine’s own page for the game redirects to Kinect Party.

Part of the reasoning is consumer confusion between the similar $10 titles. However, Kinect Party offered each “channel” as individual DLC alongside a $10 “full unlock” and was most likely seen as more profitable than its predecessor.  That said, Double Fine and Microsoft released the full game for free through the last two weeks of 2012 and continue to offer a $5 discount for owners of DFHAT who want to upgrade to Kinect Party.

“Are you annoyed at how little magic you are able to shoot from your fingers? Have you ever tried to get grandma to do the worm, but all she would do is just stand there? Have you ever noticed how your living room doesn’t have any hot lava in it? And who designed this living room anyway?! It doesn’t even have any buildings to smash! Well, Double Fine Happy Action Theater can solve all of these problems and more!

You will also be able to clone yourself or hang out in a plate of jelly if you want. And when you’re done with that, maybe you will want to feed some pigeons or have a snowball fight. There are 18 amazing ways that Double Fine Action Theater will enhance your life! And up to 5 of your friends’ lives too! (ages 2 to 102)”