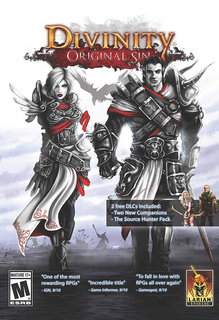 Divinity: Original Sin was delisted from Steam on October 6th, 2017. An extensive remake of the game known as Divinity: Original Sin – Enhanced Edition was released in 2015 and after nearly two years of managing both versions, Larian likely delisted the original to shore up developers who may still have been updating the older title.

Leading up to the release of the Enhanced Edition, Larian promised a free copy to anyone who already owned the original:

“In appreciation of all the fans who helped make Divinity: Original Sin the success that it was, the Enhanced Edition will be completely free to everyone who owns Original Sin. This is a reflection of our immense gratitude to all of you. We deeply appreciate your support, and the feedback we received from you helped us create and polish this game into something that we’re extremely proud of.”

“Divinity: Original Sin goes back to the values of memorable cRPGs: isometric, party based, turn based, gripping dialogues, choice and consequence, deep story, profound character and party development, a big interactive world filled with characters and items, systemic elements that create surprising behaviors, free exploration rather than linearity… There is only one main goal, and how you get there is completely up to you. And Divinity: Original Sin does all these things with a modern, state-of-the-art 3D representation.

Make optimal use of your action points, skills, spells, equipment, and even the environment to overcome the challenges set before you. Hire henchmen to balance out your party. See through the behaviors, and the strengths and weaknesses of your opponents. Bend combat rules to your advantage or suffer miserable defeat.

And here’s the kicker: if one party member stumbles upon a turn-based fight all by himself (the party does not have to stay together), the other party members are still running around in real-time. Don’t wrap your brain around the implications on the time-space continuum.“