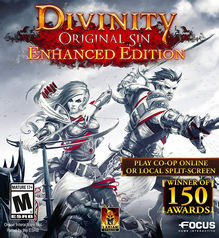 Divinity: Original Sin – Enhanced Edition was relisted on PlayStation 4 and Xbox One no earlier than November of 2019. Larian Games last addressed the delisting on October 28th, 2019, assuring fans that “we’re working on getting it back into the store”. The game’s return was not pointed out to the site until May of 2020 but likely returned earlier in the year. Focus Home Interactive continues to be listed as the game’s publisher on consoles suggesting an arrangement between the company and Larian Games was reached. Our original post follows.

Divinity: Original Sin – Enhanced Edition was delisted from Xbox One between September 9th and 12th, 2019. The game was on sale as part of the Deals with Gold promotion on Xbox One from September 3rd through the 9th. It was then submitted to our site on September 12th at which point it had already been delisted. It was likely removed from PlayStation 4 around this same time.

The delisting has not been addressed by Larian Games but as the console versions were published by Focus Home Interactive, a licensing deal with the publisher seems to be the most likely cause.

“Divinity Original Sin: Enhanced Edition Edition is a much lauded Role-Playing-Game that blends deep customization and humor with dynamic turn based combat. Either in online co-op, split-screen co-op on your TV, or even alone, take advantage of a classless RPG system to create your heroes and conquer the evils of Rivellon!

Embark upon a journey with up to three companions as you bend the very fabric of time, where what seems like the case of a simple murder unravels into hours of quests facing fiendish foes, magical polymorphs, and dastardly bosses. As a Source Hunter, master the elements and use the environment to your advantage in dynamic combats mixing weather and magic to explode, poison, electrify, freeze and burn your enemies!“