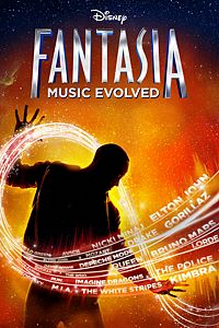 Disney Fantasia: Music Evolved and its accompanying DLC were delisted on Xbox 360 and Xbox One in late August 2018. Google Search cached copies of the game’s Xbox.com pages show that it was available to buy as late as August 18th. It was confirmed delisted by August 23rd thanks to a submission to the site.

While the game was not as successful as Disney or Harmonix had hoped, the delisting was most certainly due to its extensive use of licensed material. From Disney, to recordings of classical compositions, to modern artists including AVICII and Nicki Minaj, it was only a matter of time before the game and its DLC were delisted.

“Disney Fantasia: Music Evolved is a breakthrough musical motion video game inspired by Disney’s classic animated film “Fantasia.”  Featuring more than 30 songs and 60 remixes, Disney Fantasia: Music Evolved empowers you to create {and share} your own versions of current hits, classic rock, classical music, and more. Perform your favorite songs from Imagine Dragons, Queen, Drake, Nicki Minaj, Bruno Mars, AVICII, The Who, The White Stripes and many more. Your Kinect puts you in control of some of the world’s best known songs, changing them in intuitive and surprising new ways as you play. Experience music in a brand new way!“