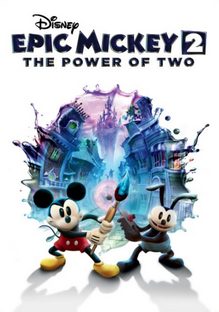 Disney Epic Mickey 2: The Power of Two was first delisted from PlayStation Vita no later than July 29th, 2016. This is the earliest date that we have found that points out the game’s absence from the PlayStation Store. The version for Nintendo Wii U appears to have been delisted in late March 2019. We received a submission from robdaboss72 on April 1st pointing out the game’s removal alongside the Nintendo 3DS release of Disney Epic Mickey: The Power of Illusion.

It appears Disney’s support page for the game was updated between March 26th and April 1st with the succinct announcement that “Disney Epic Mickey 2: The Power of Two for Nintendo Wii and Wii U has now been retired”. The game’s page on Nintendo.com has also been removed, last confirmed to have been online on March 29th.

The delistings seem to be tied to the independent developers behind the Vita and Wii U versions of the game. It could also be that Disney is simply scaling back on support for the titles they published as Disney Interactive Studios. As of this writing, they appear to acknowledge only the Steam, PlayStation 3, and Xbox 360 versions of the game.

“In Disney Epic Mickey 2: The Power of Two, gamers will play as Mickey Mouse and for the first time ever, Oswald the Lucky Rabbit, Walt Disney’s first cartoon star, in an all-new adventure of creativity and discovery. Created by industry luminary Warren Spector and Disney Interactive’s Junction Point game development studio, Disney Epic Mickey 2: The Power of Two returns the franchise to the Wii™ system from Nintendo.

Disney Epic Mickey 2: The Power of Two returns Mickey Mouse and Oswald the Lucky Rabbit to Wasteland, an alternate world filled with 80 years of forgotten Disney characters and theme park attractions. But for the first time, Mickey and Oswald will join forces as true partners – Mickey with his magical paint brush that wields paint and thinner, and Oswald with his powerful remote control that allows him to command electricity. This new co-op play combined with enhanced in-game physics will further enhance the idea that “PlayStyle Matters” – a unique approach to gameplay pioneered by Warren Spector where players dynamically tackle different challenges in order to explore all possibilities and storylines, but with consequences for their chosen actions.“

Thanks to robdaboss72 reader for submitting this game to the site