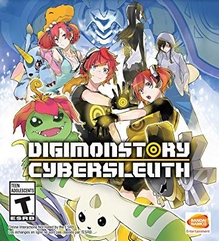 Digimon Story: Cyber Sleuth was delisted from PlayStation 4 and PlayStation Vita in North America in December of 2018 according to reporting by PlayStation Lifestyle. At the time the game was still available in Australia, Europe, and Japan but by early February 2019 it was also delisted worldwide. PlayStation Lifestyle quotes a reddit user who allegedly received a comment from Bandai NAMCO support:

“‘Contacting customer support the answer I got was that ‘the game is outdated and we focus our efforts on still supported games’ with a reference to the latest game in the franchise Digimon Story: Cyber Sleuth Hacker’s Memory – which kinda assumes the player to have played the first game,’ wrote [reddit user] SydMontague. However, the Redditor didn’t specify which support team he received this response from.”

The delisting remains unexplained. While the content of Cyber Sleuth and its follow-up, Hacker’s Memory, were compiled in the October 2019 release of Digimon Story: Cyber Sleuth Complete Edition, this version has yet to be released on PlayStation platforms. Some kind of licensing issue seems to be behind the game’s removal as Hacker’s Memory still remains available on PlayStation 4 and Vita. It may have been related to licensed content in the game (music, art, or other performances) or simply the licensing from Sony to keep the game available on the PlayStation Store.

If the latter was the cause, expect Hacker’s Memory to be delisted as well, possibly as soon as December 2020.

Set in the near future, the line between the real and digital worlds is blurred. Logging into cyberspace is part of everyday life. For one teenager, a harmless on-line chat spawns a chance encounter with a mysterious hacker. Little did this teen know, this brief meeting would lead to a digi-monumental adventure.

In Digimon Story Cyber Sleuth, scan, raise, and train your faithful Digimon companions to battle by your side against a group of hackers.