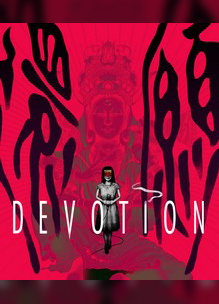 Devotion was delisted from Steam on February 25th, 2019. The game’s removal was allegedly caused by a jab at China’s president, Xi Jinping. The artwork at the center of the controversy was a poster that could be found in-game depicting the president as “Xi Jinping Winnie-the-Pooh moron”, according to translations. Jinping is reportedly averse to comparisons to the dopey bear, going as far as banning Disney’s film Christopher Robin from release in China and establishing a social media crackdown on similar likenesses.

When Devotion was still available on Steam, Red Candle Games first responded by saying that the artwork was a placeholder asset mistakenly left in the game but later admitted that one of their artists created and placed it. In the next follow-up, Red Candle Games explained their situation further and asked that critics not attack their development and publishing partners. In their final update in February, the studio said that the game was removed from Steam for bug fixes and to “ease the heightened pressure” from the community who had been review bombing the game since the artwork was first discovered. The full post reads:

“Due to technical issues that cause unexpected crashes and among other reasons, we are pulling <Devotion> off from steam store to have another complete QA check. At the same time we’d like to take this opportunity to ease the heightened pressure in our community resulted from our previous Art Material Incident, our team would also review our game material once again making sure no other unintended materials was inserted in. Hopefully this would help all audience to focus on the game itself again upon its return.”

On July 3rd, 2019 Polygon reported on news that Devotion’s original Chinese publisher, Indievent, had had their business license suspended in the country despite distancing themselves from Red Candle Games soon after the controversy started. Red Candle Games had made no new posts on social media since the delisting until July 15th. The studio broke their silence, posting an image to Twitter of a letter containing an explanation to fans and followers. On the possibility of returning the game to sale, Red Candle stated:

“While mediation is still in progress, Red Candle’s co-founders have reached a unanimous decision to not re-release ‘Devotion’ in the near term. […] If, in the future, the public would be willing to view this game rationally and allow us the opportunity to rebuild trust with our players, Red Candle would reconsider re-releasing ‘Devotion’.”

On February 21st, 2020 Red Candle announced that both Devotion and Detention would be added to the Harvard-Yenching Library’s collection of media. The full Facebook post read:

“This February, the Harvard-Yenching Library at Harvard University officially added both of our titles ‘返校 Detention’ and ‘還願 Devotion’ to its collection. It is an incredible honour which belongs to not only Red Candle but also our supporters/players worldwide. Special thank to the invitation from Harvard-Yenching Library and the assistance from James Cheng, Prof. David Der-wei Wang, Xiao-he Ma, and Yedong Chen for making it possible.

Harvard-Yenching Library, formally founded in 1928, is known as the largest Eastern Asian library maintained by any American university. As game designers, never have we thought that our works could one day be added to its prestige collection. While we truly appreciate the recognition, we had also taken this opportunity to rethink the possibilities that our games could achieve.

For the past one year, we are sorry for making our community worried. Although the current status might not be ideal, we are still here and that nothing has changed – we are and will always develop games with the same passion.

Last but not the least, we’d like to express our gratitude toward our partners, friends and families, especially a big thank you to all fans who still believe in Red Candle Games. It’s a tough year for many of us, but we will keep going, and hopefully in the future we could share more works with you all.”

As of this writing Devotion had yet to be listed among the library’s offerings. Detention (which was still available to buy at the time) could be played from a single display in a single room on the library grounds.

From June 8th to June 15th,2020 Red Candle Games accepted pre-orders for a Taiwan-exclusive physical release of the game. On December 16th, 2020 Red Candle Games announced that Devotion would be coming to GOG.com on December 18th. However, mere hours later GOG.com tweeted that “after receiving many messages from gamers, we have decided not to list the game in our store”.

RedCandle Games announced on March 15th, 2021 that they had launched their own “e-shop” to sell Detention, Devotion, and “our future projects” as DRM-free downloads.

“From the creators of the IndieCade Journey Award winner Detention, Red Candle Games brings you a story Inspired by East Asian folk culture. Devotion is a first-person atmospheric horror game depicting the life of a family shadowed by religious belief. Explore as a 1980s Taiwan apartment-complex lost in time gradually shift into a hellish nightmare. Delve into the vows each member of the family has made, and witness their devotion.

You step into your apartment, 80s music drifts through the air, an idol show plays on the television; a nostalgic setting surely, but what is this feeling of unease? You question this place you used to call “home,” noticing as it distorts with every shift of your eyes, anxious as your surroundings skirt the precipice of the extraordinary. As you push through each memory, uncovering the layers of each mystery, you may find buried in this home, the unsettling truth of those who lived here. Remember what you prayed for…“