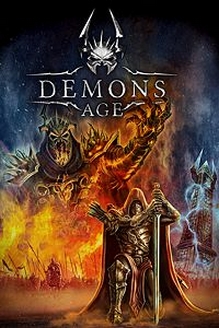 Demons Age was removed from Steam on December 19th, 2017. On December 21st, Bigmoon Entertainment’s community manager posted an explanation that the game was taken down due to a DMCA claim from “a company unbeknownst to us” for using assets from the unreleased title, Chaos Chronicles. Bigmoon admitted to this fact and explained their appeal to the company in question, ensuring that the game would be back online in early January 2018.

Demons Age did not return to Steam as expected and in January of 2018 it was delisted from Xbox One according to TrueAchievements forum posts and Achievement data. In April of 2018 it would finally be released on PlayStation 4 in Australia and Europe only to be delisted by late May according to Trophy data. The game next returned to Steam on November 7th, 2018 and was followed by a new post explaining that it was still tied up by the DMCA claim and in litigation. Demons Age was then removed again from Steam on November 8th.

As of this writing Demons Age is no longer available on any platform.

“Demons Age” is a classical Role-playing game, designed to be a modern successor of grate classic videogames such as “Baldur’s gate” and “The Temple of Elemental Evil”.

Despite “Demons Age” being highly inspired in D&D projects such ToEE, Chaos Chronicles or Baldur’s Gate, follows its own perspective on a whole new fictional world. Bigmoon took the artistic freedom to innovate, create new fictional locations, interesting characters, a captivating plot, and a whole new world to discover, experience, and gameplay.“