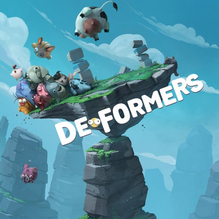 On May 11th, 2018, Ready At Dawn updated the official Deformers site to announce that the game was “no longer financially viable” and that it would be removed from sale immediately with its online multiplayer servers shut down on August 9th, 2018. The full announcement follows:

After much deliberation, Ready At Dawn has made the difficult decision to shut down Deformers servers in its Western and European markets on August 9th, 2018. All development on the Western/European version of Deformers will cease effective immediately, and as part of this transition, all physical and digital purchases of Deformers and real-money Strand Pack purchasing will be disabled.

To our Deformers Community,
Thank you for supporting us in pursuing our passion project. It isn’t often that a team gets that opportunity, and in the process also has the fortune to meet such wonderful and passionate players to join us on our journey. You’ve shared in our challenges and encouraged us along the way with your inspiring messages, artwork,and wonderful videos. We couldn’t have come this far without you. As painful as it was, we had to make a very difficult, but necessary, decision when it became clear that Deformers was no longer financially viable in the West and in Europe. This decision will allow us to keep providing the best play experience as possible for our other games and also enable us to continue to bring you new and exciting games in the future.

We thank you again for your continued support, and we encourage everyone to play and have fun with the game in the time remaining.

About the Game
“Prepare for an epic battle! Deformers is a physics-based arena brawler where the goal is to out-battle, out-eat, and out-score your opponent. Smash up your friends in splitscreen co-op, or team up and fight against others online!“

No Guts, No Glory!
Compete in a variety of game modes and dominate the competition!

Friend or Foe?
Team up to take down your enemies with online couch co-op or battle your buds in a free-for-all death match!

Aliens and Animals and Blobs, Oh My!
Choose from dozens of Forms that range from cute to crazy.

Roll Around the World!
Battle across arid deserts, decrepit ruins, and even under the big top!

A FORMidable Arsenal!
Ram, throw, and shoot your way to victory!

This Isn’t Even My Final Form!
Power-ups help Forms get that extra edge – not approved by the FDA.

Thanks to GamerFirebird90 for submitting this game to the site.