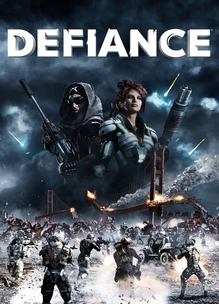 Trion Worlds announced on April 27th, 2020 that the Xbox 360 version of Defiance would be removed from the Xbox Live Marketplace and its servers shut down on May 25th. In the accompanying FAQ, Trion Worlds confirmed that both the PC and PlayStation 3 versions of the game would remain online and playable, adding that “we’re not planning on shutting them down”. The full announcement regarding the Xbox 360 version follows:

Today we’re announcing that after many years of epic battles, we’re closing Xbox 360 as a platform for Defiance 2013. This was not an easy decision for our Team, but due to old technical systems, it became impossible to properly sustain the game. Undoubtedly this will cause disappointment amongst many of you – which we understand – but we’re also making it easy to continue your adventure on Defiance 2050 seamlessly.

Worry not as we’ll gladly make Item Transfers for those of you who decide to continue your adventures and join us on Defiance 2050. It is important to note that to get your items transferred, you must link both your Defiance 2013 and Defiance 2050 accounts, otherwise the item transfer will not happen.

To warmly welcome our new Ark Hunters, there will be 100% XP and Reputation Boost beginning Monday, May 25 until Monday, June 1, 2020! Finally, the ultimate sad bit of news. The Servers will forever shut down on Monday, May 25, 2020, and will no longer be available.

For more information, please check our FAQs, where you will find insights about the Valor Commendations and the closure of the server. We’re sure you’ll find plenty of new teammates to join your new adventures on Defiance 2050!

Gamigo Group then announced on February 24th, 2021 that both Defiance and Defiance 2050, along with other MMO titles, would be shut down on April 29th, 2021. Defiance and Defiance 2050 remained available to new players until the games were shut down. The announcement for each game expressed the same sentiment of tough times, tighter budgets, and dwindling active player counts. These appear to be the collective cause behind Gamigo’s decision to close these titles. The announcement follows:

This decision was not an easy one to make. We concluded that both games could no longer sustain themselves. While we are discontinuing the games service, we will never forget the incredible journey we embarked on together. It is never easy to announce the shutdown of any game, knowing how much time and effort we have all put into making Defiance and Defiance 2050 enjoyable for many years.

As of today, all cash purchases will be disabled. Bits already purchased before February 24, 2021 will still be usable until the end of service. Players may continue to play in Defiance and Defiance 2050 and enjoy all game features until April 29, 2021. The following content will be available:

– 95% discount on all in-game items sold for Bits in the Defiance Store.
– Every 1-2 weeks, we will hold a server event for Defiance and Defiance 2050.
– Server Boosts for Skill, Reputation, and Experience Points will be active.
– Item giveaways.

Join thousands of players in Defiance, the Free-to-Play shooter MMO that defines MASSIVE CO-OP. Wield customizable weapons as you hunt for alien technology across a transformed Earth, and experience an evolving TV/MMO story with crossover content that expands the Defiance universe – all for free!