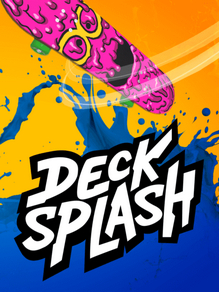 After a unique but underwhelming “free week” release to test audience interest in the game, Bossa Studios cancelled further development of Decksplash on November 10th, 2017. The free week release was announced on October 25th, 2017 after nearly a year of development and Alpha testing. The game was available for free between November 2nd and November 10th and would have been released as a Steam Early Access title had 100,000 people downloaded it. On November 10th, Bossa replaced the game’s homepage with the following announcement:

Decksplash unfortunately didn’t hit it’s target and production on the game will now stop. We always knew that 100k was a big target, but it was the only way to make sure the game was a viable product for both yourselves and us in the long term, now we’ve gotten our answer.

We want to thank everyone who supported us during the Free Week and let you all know that while this is the end of our story, we’re glad we got to share it with you. The team working on Decksplash will now move onto other projects, taking the knowledge gained from the past year to build an even better game.

At Bossa Studios we believe the best way to make games is to fail fast and move on to bigger, better things rather than sinking time into a project without a bright future. So from all of us here in the Decksplash team, Thank you for your support and we’ll see you on our next big adventure!

“The extreme world of skateboarding meets the intrepid art of painting in this six player competitive team game!

Pick one of the daring deck designs, find a match and get ready to splash big, earning experience and loot boxes for dank skrilla to bedazzle your peers!

You and two fearless teammates will spin, splash and score your way to a top quality victory where the only rule is to control the arena for the longest! Bling out your deck with your own flavour of board, trucks and wheels to get that freaky fresh feeling that everyone loves
Decksplash has got the passion for frantic action with the wild weirdness that only Bossa Studios can provide. What more can we say?! Get down here, get your deck out and start splashing it up!“

Thanks to kittco36 for submitting this game to the site