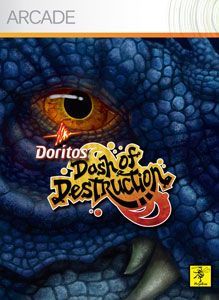 Dash of Destruction (aka Doritos Dash of Destruction) was last confirmed available from Xbox.com on October 26th, 2010.By November 26th Archive.org captures show the free download was no longer available. As a free promotional title the game was likely delisted after the end of a licensing agreement between Microsoft and Doritos.

As of July 2020 the game can still be re-downloaded if it had been downloaded before October 2010. It is also available on the demo disc included in the May 2009 issue of Official Xbox Magazine (Demo Disc #96) which has unfortunately become harder to find.

“Dash of Destruction is a fun and fast-paced racing game. Blast your way through cities as a hungry Tyrannosaurus Rex, as you chase a speeding Delivery Truck full of tasty Doritos. Or, try zooming in and out of the T-Rex’s path of destruction as the speedy Delivery Truck in search of your Doritos drop-off points. For even more racing madness, Chaos mode lets you and three friends charge through cities eating Trucks or trying not to be eaten. In Zen mode, eat the Truck to become the Truck!“