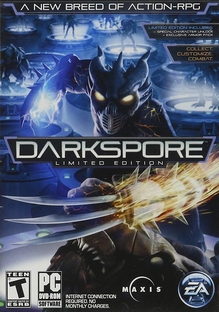 Darkspore was delisted from Steam on August 23rd, 2013 after suffering from DRM-related errors and issues almost since its launch in 2011. An announcement was made on the game’s official forum from moderator Inquisitor Laine which read:

Darkspore is no longer developed. It is for almost all intents & purposes an abandoned title. If you cannot play the game & have flicked through technical issues for any fixes, then contact EA Customer Support; especially if it regards CD-Keys or refunds.

I will however keep the forums here as clean & tidy as possible in my spare time. Why? Well why not. If it helps anyone with minor problems, or find their way somewhere, then that’s great.

I wish you all luck, no matter what path you choose with Darkspore.

Despite being removed from Steam, the game continued to be sold on EA’s own platform, Origin.com, through March 1st, 2016. The announcement was made on December 1st, 2015 and read:

“Today, we are announcing that we will be closing the doors on Darkspore, effective March 1st, 2016. It’s been a great run and we hope that you have enjoyed your time with Darkspore. While it can be hard to say goodbye, keep in mind there are tons of awesome games available for free on Origin. Enjoy 48-hours of fun with Game Time titles such as The Sims 4 and Plants vs. Zombies Garden Warfare or download the latest Origin On the House release and add it to your library. There is always something great to play on Origin and we hope to see you in another game very soon!”

The Darkspore.com homepage remains available as of this writing and has been updated to reflect the above information.

“After unstable Exponential DNA escaped the lab, it mutated into hordes of creatures known as the Darkspore. Now you have awoken from hypersleep and must assemble your arsenal of living weapons and join the battle for the galaxy…“

COLLECT YOUR HEROES
Build a powerful squad. Collect dozens of Genetic Heroes from three character classes and five Genetic types.Upgrade your Heroes with tens of thousands of collectible body parts, armor and weapons.

CUSTOMIZE AND UPGRADE YOUR HEROES
Make each of your Heroes truly unique with loot collected throughout the game, and create squads of three tailored to your play style. A nearly limitless array of combinations is at your fingertips for a truly individual gameplay experience

BUILT FOR CO-OP & PVP
Fight across the galaxy with your squad of three customized Heroes. Defeat the Darkspore in the co-op and solo campaign, and challenge other players in PvP.

SQUADS AND STRATEGY
Create the best 3 Hero squad for each level. Switch between heroes on the fly for the right ability against each enemy. Combine Heroes to unlock squad abilities, and strategically match your squad choice against other players in PvP.

DYNAMIC AI DIRECTOR
The AI Director provides players with a new experience in every play-through. Evaluating players’ performance, the AI director switches strategy through the level, to always offer fresh and unexpected challenges.