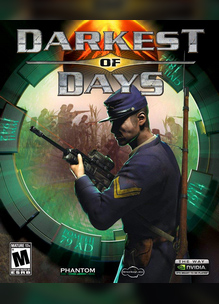 Darkest Of Days was most likely delisted in the first week of January of 2018. TrueAchievements.com posted a delisting roundup on January 9th featuring nine titles from publisher Valcon Games. As of August 2019 each title remains available to download on Steam, PlayStation 3, or both (as well as on physical media for various platforms).

Darkest of Days was next delisted on Steam on August 24th, 2021 when its price was set to $0.00. The title was developer 8monkey Labs’ and publisher Phantom EFX’s only title on Steam and the delisting may be related to either company ceasing business operations.

Have you ever wondered what could happen if time travel was a reality? Have you ever thought about the possibility of going back in time to rewrite history for the better? That possibility is a reality in Darkest of Days, where players will travel back and forth through the annals of time to relive some of mankind’s most dire hours.

By fighting through terrible events such as The Battle of Antietam, the bloodiest conflict of the Civil War, and both World War I and II, the player will attempt to save certain key individuals who were never meant to become involved in these truly monstrous events and thereby change human history for the better.