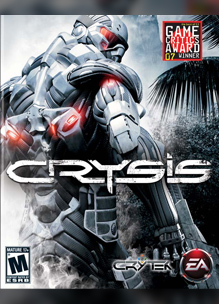 Crysis was delisted from Steam on or close to October 12th, 2021. Peculiarly, the game remains available for free as part of the Crysis Maximum Edition bundle which includes Crysis and its standalone expansion, Crysis Warhead. Some speculation suggests that the delisting relates to the Steam version’s archaic DRM and issues with CD keys. Given that all other versions of the game remain available as of this writing, EA may have chosen to delisted the Steam release in order to redirect purchases of the game to their own Origin service. Crysis Remastered, published by Crytek themselves, was released on Steam and PC in September of 2021 and may also have contributed to the decision to remove the original version from sale.

Adapt to Survive
An epic story thrusts players into an ever-changing environment, forcing them to adapt their tactics and approach to conquer battlefields ranging from newly frozen jungle to zero-gravity alien environments.

Suit up!
A high-tech Nanosuit allows gamers to augment their abilities in real time on the battlefield. Players can choose to enhance their speed, strength, armor and cloaking abilities to approach situations in creative tactical ways.

Customizable Weaponry
A huge arsenal of modular weaponry gives gamers unprecedented control over their play style. Blow the opposition away with experimental weapons, discover alien technology and utilize custom ammunition from incendiary-tipped rounds to tactical munitions that can silently put foes to sleep.

Veni Vidi Vici
Lifelike enemy AI challenges players to assess a situation and approach it strategically. It isn’t about having the fastest trigger finger, players are challenged to be proactive in the fight, not reactive.

Zero-G Gameplay
Battle a horrifying alien species in a true Zero-gravity environment, where physics change everything as players must adapt to moving in Zero-G and contending with the recoil from their weapons and more.

Open, Physicalized World
Choose your own path through the open world of Crysis, destroying obstacles, driving vehicles from VTOL’s to boats and using the environment itself against your enemies.