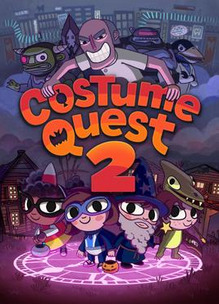 Costume Quest 2 for the North American Nintendo Wii U was presumably delisted between February of 2017 and 2019 alongside High Strangeness. However, while High Strangeness was delisted globally, Costume Quest 2 was only delisted in North America. As of this writing the game remains available on all other platforms and territories where it was released. This specific Wii U delisting may be related to Midnight City’s standing as a North American publisher on the Nintendo Wii U.

If the date range is accurate, the delisting falls within a known period where several releases were being removed from the platform, allegedly because Nintendo of America was no longer renewing developer/publisher licenses. With only two Wii U releases to their name, Midnight City may also have chosen not to maintain their standing as a publisher in North America.

Trick, treat and pick a fight with villianous dental soldiers in Costume Quest 2, the sweet sequel to Double Fine’s hit original, Costume Quest, that turned fans of all ages into candy obsessed crusaders. This inspired RPG adventure includes a range of new features and gameplay improvements to double the amount of mischievous fun. Explore spooky time-traversing landscapes, don adorable new costumes that transform into powerful Hallo-warriors, and collect even Creepier Treat Cards to wield in combat against a legion of hygiene obsessed baddies. Only heroic siblings Wren and Reynold can save Halloween forever!