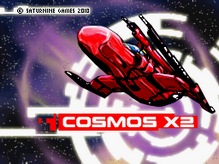 One of those issues could have been Saturnine’s dissatisfaction with Nintendo’s approval or support processes. It could also have been that Saturnine Games no longer met Nintendo’s criteria to maintain their developer or publisher status. As of this writing, no further explanation has been given and all three titles are considered Extinct.

“Enjoy on the go excitement as you take control of the Cosmos X2 and fight back against the alien invasion. Cosmos X2 features a unique weapon system providing a level of strategy not normally found in shooters. Equip your ship with two weapon systems of your choice, each with its own energy meter. Switch between the weapons at any time as the situation demands. Your current weapon will lose energy when the Cosmos X2 is hit, while the inactive weapon regenerates when enemies are defeated. Use your weapons wisely, as once an energy meter is depleted, the weapon cannot be recovered.”