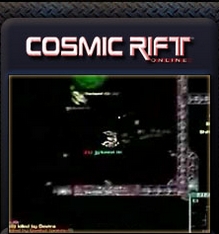 Cosmic Rift was shut down on March 29th, 2012. The team announced the shutdown of this and several SOE titles one month earlier:

An iteration of Cosmic Rift has since been merged into the community-run version of Infantry Online and is still available to play today at freeinfantry.com.

“Welcome to Cosmic Rift, a multiplayer space action game where you take command of a star fighter and wage war with hundreds of other players. Choose from 13 different fighter craft that each have their own varying strengths and unique weapons. Immobilize your enemies in the Terran Hornet.

Send energy bursts in all directions while commanding a Skithzar Kragath. Hide from teammates with your cloaking device piloting the Null A09. You will need to develop new strategies for each ship you play. And with new types of games being added all of the time, Cosmic Rift will keep you coming back for more.“