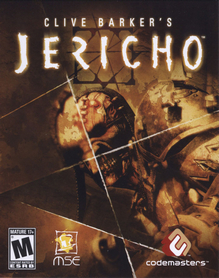 Clive Barker’s Jericho was delisted from Steam on April 3rd, 2014. It was presumably delisted due to licensing of the Clive Barker name. The game remains available on physical media.

“Clive Barker’s Jericho™ is a terrifying squad-based horror First Person Shooter game based on an original concept and story by legendary horror writer and filmmaker Clive Barker, the creator of Hellraiser™.

An ancient evil has broken through into our world and is threatening to spread its taint across the whole of the earth unless it’s stopped. At ground zero lies the Middle Eastern city of Al-Khali, a modern city built atop the ancient ruins of a dozen previous conquerors. Clive Barker’s Jericho delivers an overload of sensory horror. Players journey through hellish locations and slices of time combating gruesome and twisted enemies.

A squad-based horror First Person Shooter, “Jericho” refers to the Jericho Team, a seven-man strike force that protects government interests from paranormal threats. Trained in both conventional warfare and the arcane arts, each Jericho Team member is an expert in different para-psychological disciplines, including telekinesis, pyromancy, blood magic and exorcism.“