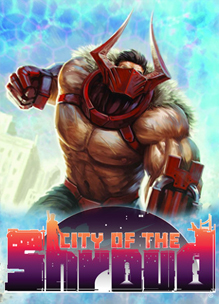 Abyssal Arts announced on February 15th, 2021 that development of City of the Shroud had come to an end and that the game would soon be delisted. After announcing a farewell sale period on March 1st, the game was delisted from Steam on March 8th, 2021. The Steam store page announcement appears below followed by an additional post from Abyssal Arts’ homepage:

I have some important updates for you regarding City of the Shroud – I wish I had better news for you, and it’s very difficult to write this.

First, the hardest news: the game will unfortunately not continue development past what’s already released. The game launched to non-existent sales, which we tried to counter with a large-scale update to improve the game and an additional round of PR – sadly, it didn’t work. We continued working on Chapter 2 until part-way through 2019, but by the summer, it became clear that the game could not be developed any further. We explored a few options to continue the story, but they never bore fruit.

I’m really sorry that the game won’t be finished, and I wish that weren’t the case. Despite our best planning, we launched at a time that turned out to be unexpectedly difficult (not just for us but for all indies), and the financial blow, not to say anything of the blow to morale, was so powerful that the project never fully recovered. Coupled with everything that happened throughout 2019, supporting development further was and is beyond my means – I’ve been trying to find a way to make it work, but I’ve exhausted all the potential options. It’s been a long road both leading up to and following all that, but please know that it was never our intention for the project to end before we finished.

I’ve said it many times before, but I want to reiterate: we are extremely grateful to everyone who supported us throughout the development process, and I am extremely proud of what our development team accomplished. Building – and releasing – something like City of the Shroud is an accomplishment in and of itself, especially with a team of our size and funding, even if the main game was never finished. It was amazing to see our idea for player-driven narrative come to life during our first Kickstarter campaign, and to relive a bit of that experience as we started building Chapter 2.

To try and keep this post as short as possible, here are some quick bullet points:

– The game will be made unavailable for purchase.

– Everyone who bought the game or backed it on Kickstarter will still have access to the game on Steam, and the online battle mode will continue to work.

– If there’s a way to let you see or play what progress was made on Chapter 2, I will update you. It is possible to play through all 5 story arcs, but the battles all use the same default group of four enemies and there are no rewards configured.

If you have any questions, concerns, whatever, please reach out to me through Steam and I’ll do my best to address them. Thank you one last time for the opportunity to go on this journey, and I’m really sorry I couldn’t see it through to the end for you.

At the same time as the above statement was made, Abyssal Arts’ homepage told a more behind-the-scenes story involving producer and “owner” of City of the Shroud, Keaton White, who left the team in October of 2019 to become a producer at Bungie. The team’s statement, which replaced the rest of the homepage, follows:

It’s been a wild ride since we first started working on City of the Shroud in 2014, and we want to address what happened since we last posted updates on Kickstarter and Steam.

The owner and team leader, Keaton White, has abandoned the project and stopped communicating with the rest of the team. We have not made progress for almost two years now. Since it appears that he has moved on to other things, we’ve decided to reach out to our customers and backers though the website, before it goes offline. We believe you all deserve closure – and an apology.

We truly apololgize for our failure to fully deliver what you all funded and supported, and for failing to provide updates for so long. This was not our intention, as we planned to provide much more content for backers, and a definitive release down the road. That’s no longer possible. We obviously cannot distribute more copies of the current release (or get paid for it) without the owners’ involvement. Now that he is gone, the development team had no choice but to stop working on the project.

We deeply appreciate your support over the years, and if you have any questions don’t hesitate to email us at [email protected] Thank you so much for sticking with us for so long, and farewell…

This game is being retired from Steam and will not receive further updates. Only consider purchasing after reading the details below. This sale is to let those interested purchase the game at a discount before it is removed.

Somewhere along the way, you made a huge mistake.

You got to the city. You bribed the customs agent to get in. You helped a poor, old haberdasher who was being robbed – the only decent thing to do, really – and then this monster from another dimension came out of nowhere. It was already almost dead when you punched it and it fell over. You keep telling everyone that.

Except, now they’re calling you the Hero of Portals, the five most powerful people in the city are each clamoring for your allegiance, and just when you’re starting to think of leaving the city for good… a magical shroud descends around the city and traps everyone inside. Next thing you know, the place is devolving into civil war, there are monsters everywhere, and apparently, you’re the answer to everyone’s prayers.

Yeah, you definitely messed up somewhere.