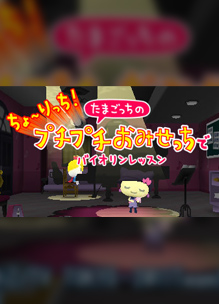 [DeepL Translation] Violin lessons in the world of Tamagotchi and Omisechi together! Just slide the stylus along with the arrows that appear on the screen, and you will feel as if you are playing the violin. There are a total of 8 songs you can play. Find your favorite song and practice it as much as you can.