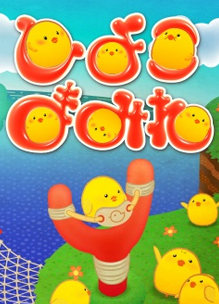 Chick Pusher (ひよこまみれ or Hiyoko Mamire) was delisted from the Nintendo 3DS eShop in Japan on May 23rd, 2018. While Unity Games Japan gave a brief advanced notice ahead of the delisting, they offered no explanation. It is likely that the game’s removal relates to the closure of Unity Games Japan and its parent company, Unity Games. Neither organization published another game after 2016 and all of their released titles were delisted by 2018.

“Chick Pusher is cute. It is a coin dropping game that you can play with chicks. Easy to play. Just pull the chick on the slingshot with a pen, peel it off, and shoot. If you successfully drop a chick in the nest, you can get rare chicks and enjoy bonus events such as egg bonus and piyopiyotim”. Also, there is no game over. Even if you think “games are fun but I don’t like difficult ones”, it is a game that you can play loosely.

And more than 100 kinds of chicks appear! Get more and more rare chicks and make the game screen covered with chicks! The game screen can be saved anytime! You can share your own chick-covered screen with everyone by posting to SNS using Miiverse or Nintendo 3DS image posting tool. In addition, you can use the original stamp of Chick Pusher in the Miiverse image post!”
– Google Translated from Nintendo Japan page