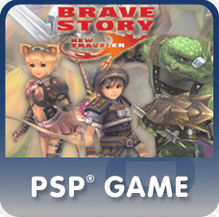 On June 3rd, 2011 XSEED Games announced that Brave Story: New Traveler would only be available to download for “a few more days”. By June 10th it had been delisted in North America, the only territory where it was available to purchase digitally.

“Brave Story: New Traveler will no longer be available on PSN after a few more days due to an impending expiration of licensing rights. Buy now or forever lose your chance to own what PlayStation Magazine ranked one of top 10 RPGs of all time on the PSP!”

“An original title created specifically for the PSP system and developed by Game Republic (Genji series), Brave Story: New Traveler features beautifully rendered 3D graphics, an epic tale with a host of colorful supporting characters, and a traditional turn-based battle system easy for beginners to pickup and play but with enough depth and innovative features for seasoned gamers.“