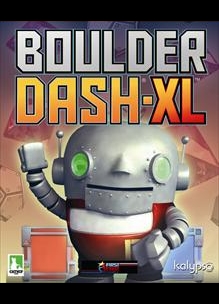 Boulder Dash-XL was delisted from the Xbox 360 no later than July 3rd, 2014 according to reporting from TrueAchievements.com. It was likely delisted from the Nintendo 3DS eShop, released there as Boulder Dash-XL 3D, around this same time. No explanation has been given but the delisting is likely tied to expired licensing of the Boulder Dash property from First Star Software, creators of the original game and the IP holder through 2016.

“Rockford™ and Crystal™, heroes of Boulder Dash®, one of the greatest classic video games, get their bits and bytes together to make their Next Gen-Debut. Back in the 80’s, when hairstyles were wild, music was electronic and video games were sold on Music Cassettes in Europe (yes, it’s really true!), Boulder Dash® won our hearts by storm.

The creative and frantic gameplay mix required both our reflexes and brains to avoid murderous rock slides of Boulders and get our hands on those precious Diamonds in 20 fun-filled Caves infested by Fireflies, Butterflies and Amoebas. In 2011 our childhood heroes take it to the Caves again on Xbox 360 in Boulder Dash® – XL™! Leaving the essence of what we all love about Rockford’s classic quest for Diamonds intact, Boulder Dash® returns Next Gen-Style, with new, exciting Game Modes, Gameplay Elements, Monsters and more Diamonds to snatch than ever before!“

Thanks to @SuperMcGuffin64 for submitting this game to the site