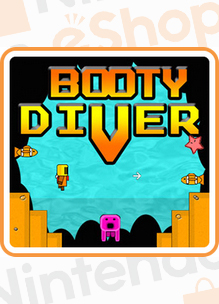 Booty Diver was delisted from the Nintendo Wii U eShop no later than January 9th, 2020. This is the date that developer Xavier Onion Games tweeted that it had been removed from sale. Their full tweet read:

So it’s with a large amount of disappointment that I realize today that Booty Diver has apparently been delisted from the #NintendoWiiU #eshop. Was hoping Nintendo would of notified me first so I could of put it on one more final sale.

Thanks to everyone for supporting it

Like other indie titles from small studios, the delisting may be related to Nintendo’s developer/publisher licensing. According to sources, Nintendo stopped renewing Wii U licenses in 2019 and once they expired all titles from a developer or publisher are eligible to be removed.

“Booty Diver is a retro arcade action game based on Atari/Nintendo games of yesteryear. The game take’s a lot of inspiration from the unreleased Atari 2600 title Aquaventure. As the titular “Diver” you traverse 5 different regions of the ocean seeking out sunken treasure (Booty) guarded by King Poseidon ,and his guardians.

These dives will not be a simple splash and grab though as you must manage a limited air supply while battling Poseidon’s minions which include Starfish, Octopi, and etc. Do not threat though as the “Diver” has a few means to defend himself with his short range diver’s knife ,and his trusty harpoon gun.

There are 5 different regions of the ocean where you take 5 dive’s per a region with each being capped off by a battle with a guardian. Some dives may require a bit more work than just battling through the monsters of the deep as you may need solve various unique challenges. After each difficulty mode play-thru it offers an unlock which gives incentive to return to the ocean depths one more time on a higher difficulty setting.“