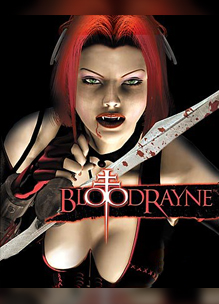 BloodRayne and BloodRayne 2 were delisted from Steam and GOG.com on November 20th, 2020, the same day that Ziggurat released the updated “Terminal Cut” versions of each title. The publisher confirmed that current owners of the original games on Steam and GOG.com would receive the “Terminal Cut” editions for free and that new purchases on GOG.com would also include the original versions. As of November 2020 the digital console releases on PlayStation 3, Xbox 360, and Xbox One remain available. It is uncertain at this time if Ziggurat will update or remove these versions.

In the years between the World Wars, Agent BloodRayne works as a killing machine for The Brimstone Society–a top secret fraternity that hunts down and destroys supernatural threats. Two missions, five years apart, turn out to be connected by one man. For years, this man has been searching the world for powerful occult relics to bring Germany into a new age of domination. Rayne must face his elite Nazi army and prevent them from releasing horrific creatures in their quest for the artifacts. Starring the super-sexy, super-lethal, supernatural heroine BloodRayne, this original action horror game unleashed the red headed dhampir on the world.