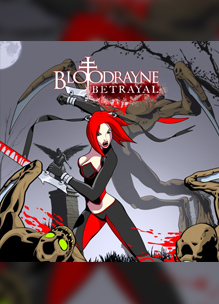 The original releases of BloodRayne: Betrayal were delisted on GOG.com and Steam on September 9th, 2021, the same day as the release of BloodRayne Betrayal: Fresh Bites from Ziggurat Interactive. The Xbox 360 releases were presumably delisted around this same time. As of November 2021 the PlayStation 3 versions remain available to download. GOG.com confirmed shortly after the release of Fresh Bites that all owners of the new title would have access to download both the Ziggurat and Majesco versions.

The original video game femme fatale, Rayne, has returned to battle and feed in a brand new hack ‘n slash adventure. Slay ghastly enemies as Rayne, the sexy dhampir with superhuman strength, speed, and agility, recruited by the vampire hunting Brimstone Society for one last mission. The target is a lavish, yet sinister ball in a secluded castle with plenty of dark and gruesome surprises. With the help of a mysterious friend, and members of Brimstone, Rayne must infiltrate the manor, take out the fiendish horde, and stop an evil master plot once and for all.