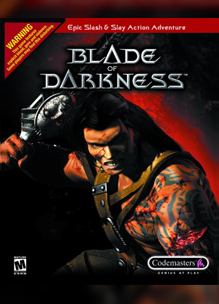 Blade of Darkness was delisted on GOG.com on October 14th, 2014. The GOG.com team made the announcement earlier on the same day, apologizing for the late notice. The delisting was likely due to Codemasters’ move away from their legacy and non-driving titles. In August of 2021, publisher SNEG announced that an “HD Remaster” of the game would be released on Steam and GOG.com later that Fall in October. Since the engine, assets, and presumably the store listing on GOG.com will be altered from the original, this is not considered a relisting.

[FROM GOG.com] Blade of Darkness, a brutal and challenging TPP action hack ‘n’ slasher set in a dark and gritty heroic fantasy realm that feels like a Robert E. Howard novel, is available on GOG.com, for only $5.99

Heroic fantasy–a genre of fiction that has fueled the imaginations of many generations. Dark and brutal worlds full of injustice and ominous magic are always waiting for a champion: a man or woman, scantily clad, wielding a legendary weapon, slashing beasts and villains left and right, and looking as fabulous as a demigod. This is the heart and soul of such stories and it didn’t change much since the time of ancient myths. The fact that we enjoy them so much proves that we aren’t that different from our great ancestors and tales of godlike heroism still get our blood run pumping. Gather ‘round, friends, and hear the story of four heroes and their epic battle against the dark overlord, Dal Gurak, the necromancer.

Blade of Darkness is a third person perspective action game that focuses on combat. Each of the four heroes has its very own set of moves and statistics, and starts the adventure in a different area. There’s over 100 different weapons you can use in the game, each with its own characteristics that reflect on the fighting style. New special attacks can be unlocked as your character gains experience and power. While you slash and bash through the hordes of terrifying monsters, you will feel the urge sometimes to stop and look at the beautiful–if a bit gloomy–surroundings. If you’re looking for a game that will take you on a fantastic quest filled with merciless combat, this is the one to pick up!

There are great deeds of bravery and might to be done in Blade of Darkness, for only $5.99 on GOG.com. Get heroic!