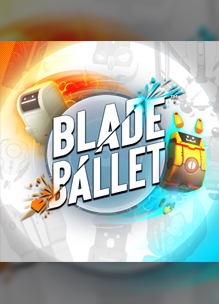 Blade Ballet was delisted on PlayStation 4 no later than March of 2019 when its absence was pointed out on the PSNProfiles forums. As DreamSail Games appears to have been dormant since 2017 it is possible that their standing as a PlayStation publisher expired and caused the game’s removal.

Blade Ballet is a whirling dance of multiplayer robot destruction. Each character possesses a unique personality and special abilities – use them to claim victory as you spin from one challenging arena to the next, battling for dominance in this action-packed fighting game.

Blade Ballet is simple enough for anyone to pick up a controller and jump into the fray, but players must master the timing and unique abilities of each bot to come out on top. This makes the game easily accessible to new players, while allowing for a high skill ceiling to truly compete with your friends. Much of the Blade Ballet gameplay revolves around the innovative “blade spin” mechanic – players control their rotation to sneak past their opponents’ defenses and secure the kill. Each arena also introduces new game mechanics that players must incorporate into their strategies.

Thanks to Charles Telgenhof for submitting this game to the site