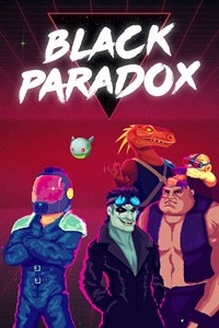 Black Paradox was delisted from the PlayStation 4 in Australia, Europe, and Japan in May of 2019 according to forum posts on PSNProfiles. As the game is available in most territories but only on specific platforms, the delisting seems to be tied to regional rating boards or platform-specific certification issues.

Thanks to FallenRyan for pointing out that Black Paradox was relisted in Australia and Europe in July of 2019. As of this update the game has yet to return to sale in Japan.

“Black Paradox is a fast-paced roguelite shoot ’em up. Unleash an arsenal of weapons, power-ups, drones, and other upgrades to survive waves of enemies, against a backdrop of vibrant pixel art and synth-wave soundtrack. As the infamous bounty hunter Black Paradox, travel through space and defeat the most dangerous criminal organization in the galaxy: the Hellraisers and its seven lieutenants. Enter the cockpit, ready your weapons, and prepare for the ultimate galactic showdown.“