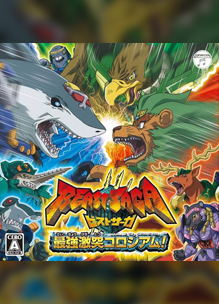 Beast Saga: Saikyou Gekiotsu Coliseum was delisted from the Nintendo 3DS eShop in Japan on August 31st, 2016. The delisting was likely caused by expired licensing of the Beast Saga property from TV Tokyo. The game’s Nintendo.com page references a JASRAC license for the game’s theme song which may also have expired.

Google Translation:
Popular TV anime “Beast Saga “appeared on the Nintendo 3DS! Growl sword game of Tekken! angry waves! one-shot reversal! in mortal work is hot exciting Beast action, fighting action game! Incandescent. In the strongest clash Coliseum, the team battle to a maximum of 6 body is be jumbled together You can enjoy it.

Beast Fight by forming a team with 3 beasts!
Team formation that identifies the individuality of the beast is the key to victory or defeat!

☆ Many characters have appeared!
Over 30 beasts from land, sea, and air races participate in the war In story mode, a story about the mysterious energy body, Godlot, unfolds. You can enjoy the battle while experiencing the story of the beasts.

☆ Communication play
can communication competition in the local play if there are two soft. Seriously compete with your friends with the trained beast! In addition, a mode in which up to 3 people cooperate to challenge strong enemies is also installed.