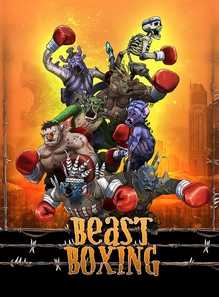 Sad news, beast boxers: Goodhustle Studios, Inc. will be closing down this year. Beast Boxing Turbo will be removed for sale through Steam on March 29th, 2019, and I will no longer be able to provide support for our titles after that time. I haven’t had to answer many support questions in the last few years, so hopefully all of the common bugs have been sorted out by now.

If you have previously bought or redeemed the game on Steam, you should continue to be able to continue to access the game. The Steam version’s leaderboards for Endless mode should also continue to work.

It’s been great to see people discover this game and enjoy it over the years, even as I’ve stepped away from game development to focus on family and other jobs. To all the fans: thank you for your support and enthusiasm over the years! I’ve been glad to see you enjoy our work.

The game was also released through Desura but became unpurchasable when the service shut down in 2015, and on the Ouya whose digital storefront was retired in June of 2019. Its predecessor, the iOS exclusive Beast Boxing 3D, has also been removed from sale.

“An artfully designed first-person boxing game with freestyle arcade action in which you punch a turkey in the face.

Beast Boxing Turbo is a challenging first-person boxing game with fast-paced freestyle boxing action. You play a secret human boxer in a beastly world. She’s outmuscled, undersized, and in way over her head. Can she master the skills needed to get to the top of the legendary boxing leagues of Beasthalla?

Develop a fighting rhythm between attack and defense, and don’t give up hope if you can’t beat these monsters on your first try. There’s a host of skills to train, and new gear to acquire that can give you an edge in the ring. Build up your boxing skills to match your personal style, and beat the grand champion of the Ultra League to unlock NewGame Plus mode and reach a new level of challenge.“