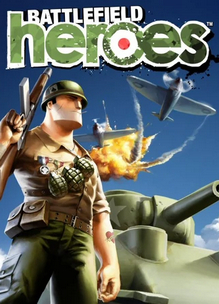 Thanks to the fan projects, Rising Hub and Phoenix Network, it is possible to play Battlefield Heroes through private servers.

“Calling all soldiers! Battlefield Heroes™, the unique Play 4 Free third-person shooter, has already recruited one million players to sign up for the game. With no barriers to entry, Battlefield Heroes is EA’s most recent title under the web-based free to download, free to play business model which generates revenue through advertising and in-game item sales. Recently going live in June, tens of thousands of new players are joining the battle daily.

Battlefield Heroes is easy to pick up and delivers all of the award-winning signature Battlefield sandbox multiplayer gameplay. The game features robust character customisation and a deep ability and mission system where gamers can spend hours building up their characters. Now anyone can be a hero on the battlefield.

Before going into battle across four intense maps, gamers can create a number of personalized characters. Battlefield Heroes features a non-traditional third-person camera view so players can admire their one-of-a-kind hero while taking out the enemy. Character customisation items are available for Valor Points (points earned by playing the game) or with Battlefunds (a fictional currency bought with a credit card or PayPal) so players can update or change their hero’s style at any time.

Battlefield Heroes is a new EA title that is offered completely for free and with its fun cartoon-style graphics, the game caters to players of all skill levels. It also features a built-in matchmaking system to ensure that each gamer in the 16-player matches are of equal skill and paired together for fair play.“

Thanks to Alexander for submitting this game to the site