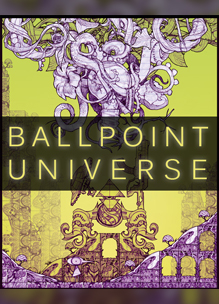 Four releases from publisher Unity Games Japan — Ballpoint Universe: Infinite, Girls Like Robots, Nihilumbra, Stick it to The Man!, and Teslagrad — were delisted from the Nintendo Wii U eShop in Japan on December 28th, 2016.

While Unity Games Japan gave a brief advanced notice ahead of the delistings, they offered no explanation. It is likely that their removal relates to the closure of Unity Games Japan and its parent company, Unity Games. Neither organization published another game after 2016 and all of their released titles were delisted by 2018.

Ballpoint Universe: Infinite was next delisted from the Nintendo Wii U eShop in North America at some point between 2018 and April of 2019. The North American release was published by ArachnidGames who may have ceased operating as a publisher on Nintendo platforms resulting in the game’s delisting.

“Ballpoint Universe Infinite is a shoot-em-up adventure game featuring artwork entirely drawn in ballpoint pen. Explore immaculate worlds, discover the secrets of the doodles, and customize your Ink-Ship for battle!“