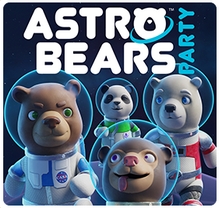 Astro Bears Party was delisted from the Nintendo Switch no earlier than April 3rd, 2019. This is the last date that Archive.org captures show that the game was still available to buy. The game was originally co-published and developed by SONKA and QubicGames but on December 10th, 2018 the brand rights were transferred wholly to SONKA.

This change in ownership may have been the cause of the game’s delisting but it is also possible that SONKA was unable to meet Nintendo’s requirements for a planned update in 2018. SONKA then essentially replaced Astro Bears Party with the July 2019 release, Astro Bears, and offered it for free to owners of Astro Bears Party until August 16th, 2019.

“Astro Bears Party is an easy-to-learn, hard-to-master game about running around a planet and avoiding each other’s Magical Beary Ribbons. Jump and hover over Ribbons using a jetpack. Perform dashes to threaten your opponents. Be the last Bear standing!

Choose one of 4 Bears with different playstyles and battle between 2-4 players. Take a challenge in single player mode and beat your own record in Jetfish Hunting!“

Thanks to walterbengt for submitting this game to the site