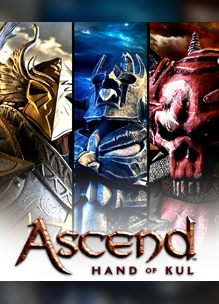 Ascend: Hand of Kul was delisted on Xbox 360 on August 18th, 2014. Shortly thereafter, on August 20th, Signal Studios announced that Microsoft had ended support for the title and planned to shut it down for existing players on November 18th, 2014. Signal Studios’ announcement follows:

Signal Studios must regretfully announce that despite our best efforts and the games success, Microsoft has discontinued support for Ascend: Hand of Kul on the Xbox 360 and removed the game from the Xbox Live Marketplace. This surfaced to us while investigating various issues players have been experiencing over the weekend.

We are deeply saddened by this decision and the impact it has on our community. While Microsoft discontinued support for the Xbox 360 version of Ascend, Signal has released a free BETA version of the game on Steam with a wealth of gameplay improvements where the community can still enjoy slaying trolls and converting altars.

In appreciation of our fans, Signal Studios will grant all new Ascend PC players a starting bonus of souls totaling 25K which can be used to purchase gear, spells and buffs. All existing Ascend PC players will receive a 10K soul bonus just for playing.

Ascend continued on Steam for a number of years until Signal Studios announced the impending retirement for this version of the game on June 1st, 2016. The announcement read:

Signal Studios must regretfully announce that Ascend: Hand of Kul’s last day on Steam will be June 20th, 2016.

Here at Signal, we’re humbled that so many of you joined us as we brought this Xbox 360 free to play title to Steam. You have slayed Titans, waged war against player avatars, ascended to many gods, climbed leaderboards, collected billions of souls, and forged friendships within this community all at the same time.

Thank you for enjoying this game and sharing your experiences that you had inside this epic world that we crafted. While we might be saying goodbye to Ascend right now, please know that we are always exploring new concepts and ways to bring great games to more players around the world.

All the best,
The Signal Studios Dev Team

On September 2nd, 2022, Outer Heaven Studios announced on Twitter that a re-release of Ascend: Hand of Kul was in development and would be titled Ascend: Reborn. The Ascend Twitter account would go on to share updates on the game’s development until it was released on Steam on November 30th, 2022.

Wage war for your God as a brutal Caos warrior on a unique journey to Ascension. Destroy the spawn of the Titan, invade other players’ worlds, and tip the balance in the Crusade between the alliances. Ascend: Hand of Kul is a free-to-play third-person action RPG featuring innovative seamless single and multiplayer gameplay and multi-platform support.

Thanks to Sharpie for submitting this game to the site