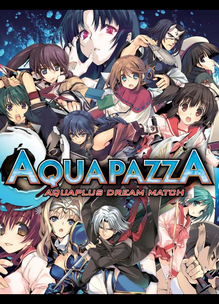 Aquapazza: Aquaplus Dream Match was delisted from the PlayStation 3 in North America in early 2019. The game was last confirmed to be available in late December of 2018 when it was featured in a Boxing Day sale announced on the PlayStation Blog. On April 26th, 2019 Twitter user @29th_Double confirmed that the game was no longer available to download outside of Japan.

The game was most likely delisted due to expired licensing between Atlus and Aqua Plus.

“What is AquaPazza? Legend speaks of an amazing magical power that would grant its controllers’ desires, but what happens when such an influential power is misused? Choose from 13 main characters and 13 support characters to fight in a world corrupted by powerful magic in this uniquely illustrated, wildly entertaining, all-out fighting game. Use flashy combos, partner attacks, and high emotion to restore balance to the world! Gather a team of two, thrust into battle, and go crazy with your attacks!

From bookshelves to lances—use all weapons at your disposal! AquaPazza utilizes mechanics that allow players to easily link together attacks and break through even the toughest of defenses. Fighting isn’t all about being physically strong! Players who keep their character’s morale high during battle will be granted an advantage, allowing attacks to deal more damage and defense to become higher than ever!“

Thanks to Baron for submitting this game to the site