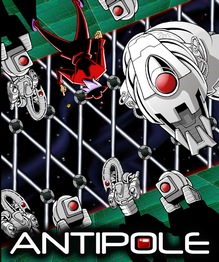 One of those issues could have been Saturnine’s dissatisfaction with Nintendo’s approval or support processes. It could also have been that Saturnine Games no longer met Nintendo’s criteria to maintain their developer or publisher status. Antipole was previously available on Desura and Xbox Live Indie Games until the closure of both marketplaces.

As of this writing, no further explanation has been given and all three titles are considered Extinct.

“Fast paced platforming action based on gravity manipulation. Reverse gravity in the area around you for short periods of time to climb higher and jump further. Anything caught in the altered gravity area is affected as well – enemies, objects, and even acid pools will fall along the new direction of gravity. Use your gravity powers to fling enemies. Run along the ceiling to avoid obstacles. Manipulate gravity to solve puzzles.”