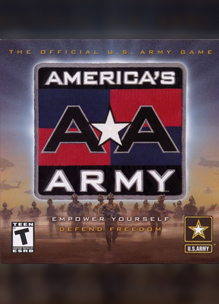 Although it was not mandatory in the early years, America’s Army eventually came to require a Battletracker.com account in order to play the game. In January of 2018 it was announced that Battletracker.com would be shut down by November of the same year, making America’s Army and it’s 2.x updates unplayable. However, since at least 2010 the series’ dedicated community has offered ASSIST, a client and servers to continue playing older versions of the game.

The America’s Army game, which is rated T for Teen by the ESRB and recommended for recruits 13 years old and above consists of two interlaced games. The first is Operations, an action-packed first-person 3D game where you enter into “virtual service” to the United States. As part of the Army, you are bound by the laws of land warfare, Army values and realistic rules of engagement as you go through teamwork-based multiplayer networked squad versus squad operations. Mission accomplishment and a high ranking in the game are a function of team effort. Teamwork and responsibility are key, and those players that violate the rules will find themselves in a virtual jail cell at Fort Leavenworth. Values, which reflect the U.S. Army’s values including loyalty, duty, respect, selfless service, honor, integrity and personal courage, are integral to your success.